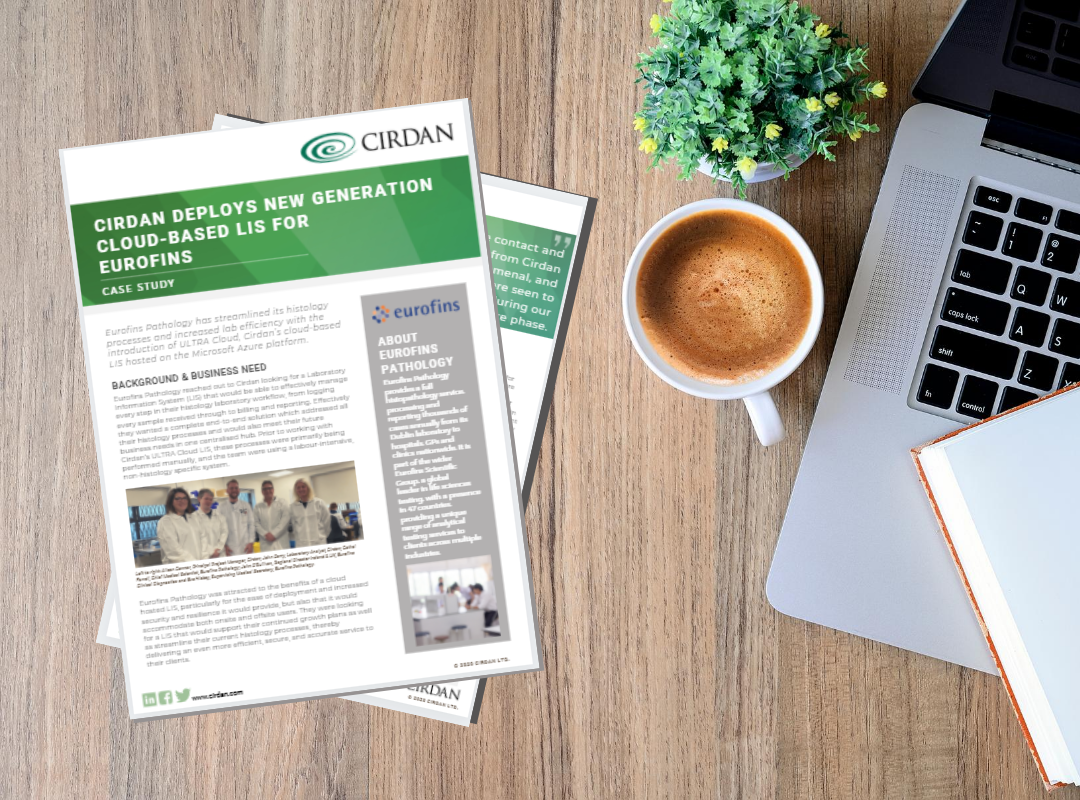 Eurofins Pathology has streamlined its histology processes and increased lab efficiency with the introduction of ULTRA Cloud, Cirdan’s cloud-based LIS hosted on the Microsoft Azure platform.

Eurofins Pathology provides a full histopathology service, processing and reporting thousands of cases annually from its Dublin laboratory to hospitals, GPs and clinics nationwide. It is part of the wider Eurofins Scientific Group, a global leader in life sciences testing, with a presence in 47 countries, providing a unique range of analytical testing services to clients across multiple industries.

Eurofins Pathology reached out to Cirdan looking for a Laboratory Information System (LIS) that would be able to effectively manage every step in their histology laboratory workflow, from logging every sample received through to billing and reporting. Effectively they wanted a complete end-to-end solution which addressed all their histology processes and would also meet their future business needs in one centralised hub. Prior to working with Cirdan’s ULTRA Cloud LIS, these processes were primarily being performed manually, and the team were using a labour-intensive, non-histology specific system. 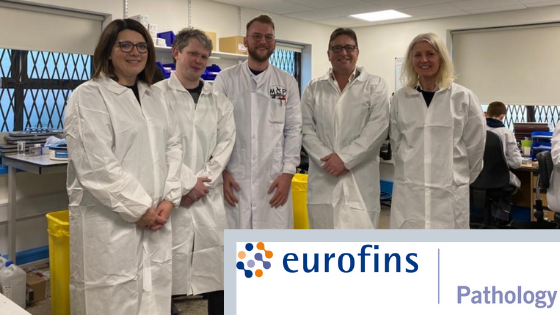 Eurofins Pathology was attracted to the benefits of a cloud hosted LIS, particularly for the ease of deployment and increased security and resilience it would provide, but also that it would accommodate both onsite and offsite users. They were looking for a LIS that would support their continued growth plans as well as streamline their current histology processes, thereby delivering an even more efficient, secure, and accurate service to their clients.

The Challenges and the Solutions

Like any project of this nature there were some challenges. The impact of the Covid-19 pandemic meant that only half the Eurofins Pathology team were in the laboratory during go-live. Performing a go-live without any Cirdan personnel on-site is not ideal, but it was managed successfully and aided by the fact that it was a cloud deployment. Remote video calls and chat via Microsoft Teams were used during go-live, which were sufficient to complete a smooth deployment. Being properly prepared for go-live and having a well-prepped on-site Eurofins ‘champion’ was also crucial to go-live success.

Cirdan needed to ensure that Eurofins Pathology’s remote/off-site users could access the new LIS with ease. The cloud installation provided instant advantage and a head start on this, but it required excellent co-ordination between the Cirdan cloud services team and the Eurofins Pathology IT team to deliver.

Having excellent metrics and business intelligence reporting was very important for Eurofins Pathology and something they were previously generating manually. Cirdan took time to fully understand and define their needs in this area during the discovery phase in order to be able to automate both management reports and reports for submission to third party registries e.g. the Cancer Registry.

Adapting to a brand-new system can be challenging for staff. This change was eased with the support service provided by Cirdan. Cathal Farrell FACSLM, Chief Medical Scientist at Eurofins Pathology commented:

“The contact and involvement from Cirdan has been phenomenal, and any issues were seen to straight away during our hyper care phase.”

Eurofins Pathology are already seeing the benefits of deploying ULTRA Cloud LIS. When asked about the impact the LIS has made so far, Cathal Farrell responded:

“Our report turnaround times are much better, which is great for us. This was the main sticking point with our old system. Previously, producing and tracking reports was cumbersome and time-consuming. I can pull real-time stats from ULTRA in seconds now, where it might have taken me days to compile these in the past. There is a big time saving in preparing for monthly management meetings and generating reports on Finance metrics and KPIs. Having capacity for remote sign-off is a real benefit of the system, previously this all had to be done onsite. Our audit trail capability is more enhanced, ULTRA has enabled us to monitor and track things more efficiently through the lab.”

“Overall, the experience has been very positive, both for me personally and for the business, I can’t rate the Cirdan team highly enough. Our IT team were particularly pleased that we went with a cloud managed service too. So, all in all, as a team we are very happy with our decision to go with ULTRA Cloud.”

This site uses cookies to help the site provide a better user experience. Find out more.