Pathology Imaging – Are you thinking correctly about “resolution”? 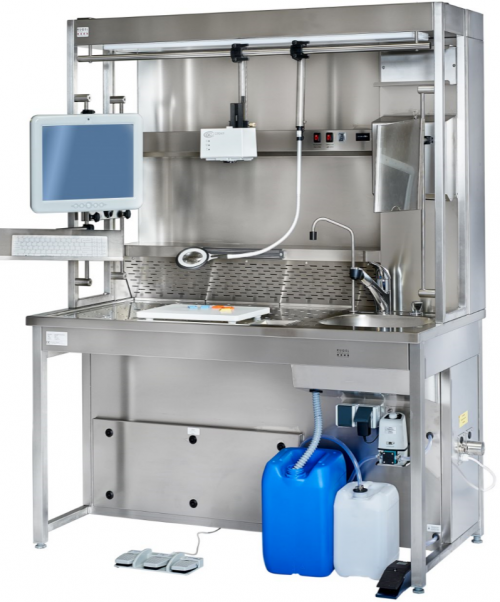 When capturing images for pathology there are 4 areas that should be considered when thinking about image resolution.

Camera resolution deﬁnes how many individual pixels are available to record the actual scene. This resolution is generally deﬁned in megapixels (MP). The more megapixels the camera offers, the more information is being recorded in the image. If sensor size was the only thing that deﬁned image quality and detail, it would be easy to pick out a camera with bigger being better, however this simple formula will not serve you well. In addition to sensor size, image detail and quality are affected by such factors as lens quality, ﬁle formats and image processing. Using a high quality lens with higher optical zoom capabilities and low levels of distortion, may offer more benefit than high pixel counts.

It’s best to choose a monitor with the highest resolution available so you can see as much of your image as possible at once. However, keep in mind that for a given screen size, the higher the resolution, the smaller the screen’s interface elements will appear on your monitor.

Output resolution in the image ﬁle is simply a matter of how the pixels are spread out in the image, which in turn determines how large the image will print and to a certain extent the quality you can obtain in the print.

Printer resolution is the measure of how closely the printer places the dots on paper. This is a major factor in the amount of detail the printer can render and therefore the ultimate quality of the print. The printer’s resolution is determined by the number of ink droplets being placed in a given area, not by the number of pixels in your image. Therefore, there won’t necessarily be a direct correlation between output and printer resolutions, because multiple ink droplets are used to generate the individual pixels in the image.

In the era of digital imaging there is another area to take into consideration – the storage, transfer and sharing of images.

Today, the DICOM standard is the backbone of every medical imaging department. The added value of its adoption in terms of access, exchange and usability of diagnostic medical images is in general, huge. DICOM is not only a file format but also a network communication protocol. Formats such as JPEG or BMP are commonly used where DICOM is not available but they lack the security and traceability of DICOM.

Image sizes does not equate to file sizes as there is additional information that may need to be stored called Metadata. This helps identify the file and may contain information such as patient demographics and workflow tracking.

There are a number of reasons why you would want to keep the size of your files in mind. One we encounter almost daily is the limitation set by many email providers when it comes to attachments. Often attachments for an email sent are limited to 20-25MB for individual files. Internal mail networks may allow for some larger files.

Some Pathology images such as WSI, (Whole Slide Images) require huge amounts of storage space. These are generally catered for by the WSI equipment supplier and taken into consideration when purchasing a WSI system. For other pathology images such as gross images (taken during the cut-up stage of processing) there is rarely much storage allocated on the network. You should understand the requirements for storage and plan in advance.

Digital camera manufacturers promote the number of megapixels a camera is able to capture. This is an important factor to consider, but other important factors also impact ﬁnal image quality. Keep in mind that you may not necessarily need the camera with the most megapixels for your particular needs. Most importantly you should consider how images are going to be used, for example:

Sending or receiving large files across a network has its own issues. Large files take disproportionately longer to transfer or load compared to smaller file sizes. Make sure to check your network speeds. Finding and identifying files is best achieved using Indexed searches using professionally developed and formatted image stores, such as a PACS. Windows file structures or those of other operating systems are not necessarily optimised for searching and retrieving.

Retaining and protecting data is very important when considering medical images. For pathology there may be a requirement to revisit earlier images. If so, it is important that these images are available and original i.e. unmodified. The DICOM rules and regulations incorporate these requirements but beware standard image formats such as BMP or JPEG, which are often considered. These standard image formats have no built in protection and can be easily altered or deleted.

Most Pathology images are viewed on PC monitor screens and may be included in email, reports, or used with projectors for presentations. In all of these cases the electronic display is the limiting factor. As most displays are FHD or lower, matching the camera resolution to the display will optimise the resolution for a given image.

If printed images are the main requirement, then consider the capabilities of the printers to be used and the size of the image that will be printed. Reports for example may not require full size images. Posters on the other hand will benefit from higher resolution images.

Other factors, such as lens quality and choices, sensor quality and special features, such as video or a high ISO or frame rate  are also important when you’re deciding which camera is best for you. By understanding what the various speciﬁcations mean and determining which factors are important to you, you’ll be able to make an informed purchasing decision.