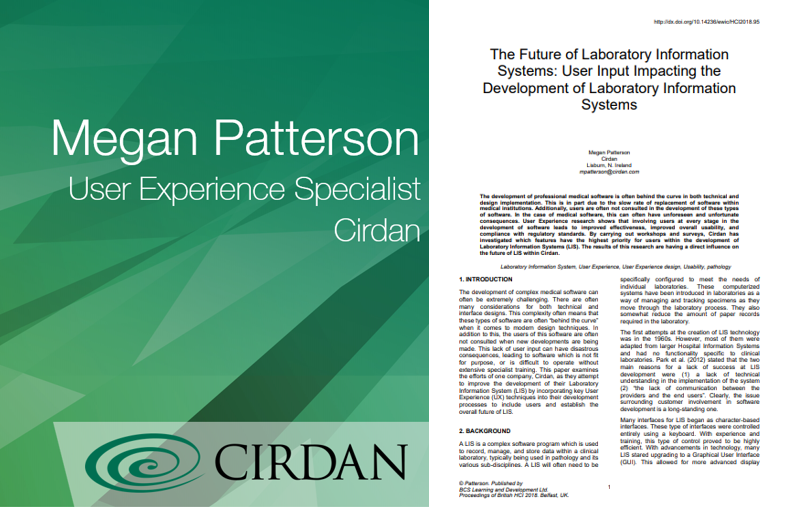 The development of professional medical software is often behind the curve in both technical and design implementation. This is in part due to the slow rate of replacement of software within medical institutions. Additionally, users are often not consulted in the development of these types of software. In the case of medical software, this can often have unforeseen and unfortunate
consequences. User Experience research shows that involving users at every stage in the development of software leads to improved effectiveness, improved overall usability, and compliance with regulatory standards. By carrying out workshops and surveys, Cirdan has investigated which features have the highest priority for users within the development of Laboratory Information Systems (LIS). The results of this research are having a direct influence on the future of LIS within Cirdan.

INTRODUCTION
The development of complex medical software can often be extremely challenging. There are often many considerations for both technical and interface designs. This complexity often means that these types of software are often “behind the curve” when it comes to modern design techniques. In addition to this, the users of this software are often not consulted when new developments are being made. This lack of user input can have disastrous consequences, leading to software which is not fit
for purpose, or is difficult to operate without extensive specialist training. This paper examines the efforts of one company, Cirdan, as they attempt to improve the development of their Laboratory Information System (LIS) by incorporating key User
Experience (UX) techniques into their development processes to include users and establish the overall future of LIS.

BACKGROUND
A LIS is a complex software program which is used to record, manage, and store data within a clinical laboratory, typically being used in pathology and its various sub-disciplines. A LIS will often need to be specifically configured to meet the needs of
individual laboratories. These computerized systems have been introduced in laboratories as a way of managing and tracking specimens as they move through the laboratory process. They also somewhat reduce the amount of paper records
required in the laboratory. The first attempts at the creation of LIS technology was in the 1960s. However, most of them were
adapted from larger Hospital Information Systems and had no functionality specific to clinical laboratories. Park et al. (2012) stated that the two main reasons for a lack of success at LIS development were (1) a lack of technical understanding in the implementation of the system (2) “the lack of communication between the providers and the end users”. Clearly, the issue
surrounding customer involvement in software development is a long-standing one.

Many interfaces for LIS began as character-based interfaces. These type of interfaces were controlled entirely using a keyboard. With experience and training, this type of control proved to be highly efficient. With advancements in technology, many LIS stared upgrading to a Graphical User Interface (GUI). This allowed for more advanced display capabilities as well as the ability to navigate the software using a mouse. Many interfaces which were initially given a GUI in the 1990s and early
2000s have not been redesigned since, leading to dated and difficult to use interfaces. With recent technological improvements, many companies are not looking to moving their LIS to the web. The adoption of new technology is often slow in the healthcare sector. Due to the complex nature of hospital systems, integrating new technologies can be a complex and time-consuming process. there are also patient-centric considerations to take into account around safety and security which can discourage implementing new systems (Thurston & Gagnon, 2017).